A Ride With Harald Vik

Good morning. This is what Clint's driveway looks like at 9am Saturday morning. At this point in the day I have an inkling that I'd like to try for a Century, 100 miles on the day. It's been a long time since I've gone that far but this season has been a great season for me. I felt ready.

I also want to note this is the first time in a long time that I've worn a proper cycling jersey. This bit of information should be considered foreshadowing. 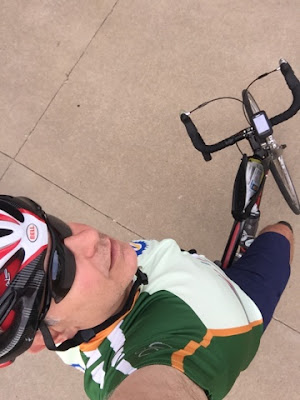 We departed for the 12 mile bike trail trip to downtown where we met up with Harald Vik. Harald is a 70 year old world traveler from Norway. When he goes places he travels by bicycle. A year ago Harald was departing Sioux Falls and was struck on Marion Road by a car. His list of injuries was long. His recovery, first at Sanford Hospital then back in Norway is long. Still going actually.

My friend Val was also concerned. She set up a Gofundme effort, visited Harald and crew in the hospital, and remained connected with the group. Because of that, upon returning to the city they contacted her and invited her to ride. Additionally they were particularly interested in safe ways out of Sioux Falls.

On Thursday we flooded Facebook. On Friday we reinforced the flooding on Facebook. A press release was issued. All of this led to scenes like this: 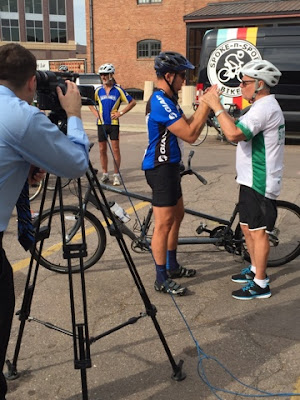 Harald being interviewed by KDLT. Harald is deaf and blind. He communicates using touch and signing through the three interpreters that travel with him.

There were also scenes like this - 10 intrepid riders accompanying Harald toward Montrose. 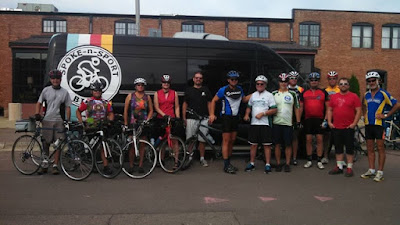 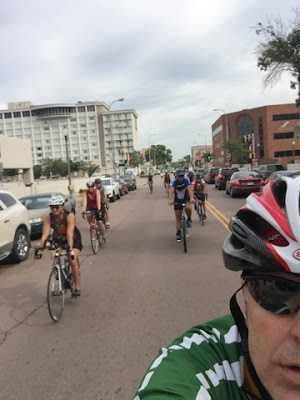 We managed to find our way out of the city and onward to Crooks. Crooks is the only chance for a rest stop on our selected route to Montrose. So we stopped. And rested. And then... 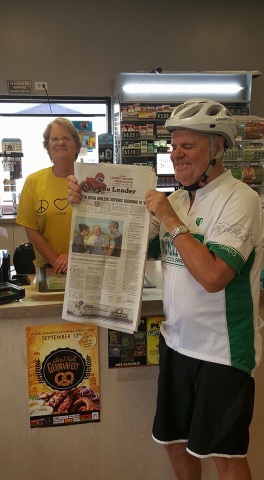 ...this person hard at work at the stop asked if Harald was indeed the person featured on the front page of the Argus Leader newspaper that was for sale right over there. He is the one.

On the Crooks departure I was able to grab the place next to Harald to get this picture. This is how a deaf and blind man travels the world on a bicycle. 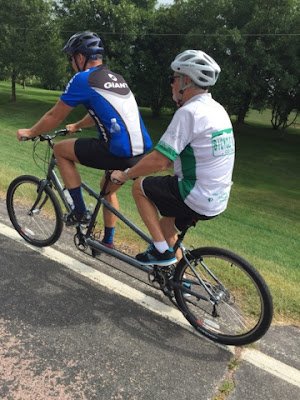 Four hours later, what remained of our group was nearing Montrose. We had some expected, nay invited attrition along the way. This is Clint, Gene and Kirk. I'm taking the photo... 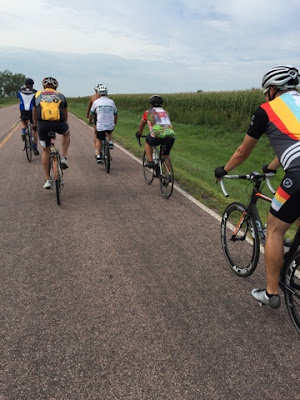 ...and there's Chad and Leanna close at hand. Too close? I had asked them to approach for the photo. Doesn't Kirk's bicycling costume look nice and remarkably similar to the van graphics? Coincidence? 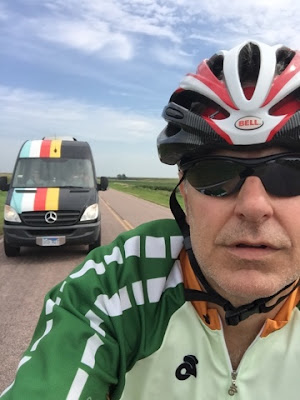 We arrived in Montrose in search of food. We found some burgers being vended at what turned out to be a rather large beer league softball tourney. As it turns out there are more popular ways to arrive at a beer league softball tourney than hungry, on bikes, in full bike regalia. I'll stop short of describing how one probably should dress and act to fit in at such a place.

I will say this...today I talked my way out of a beer league bathroom stall while a bunch of beer soaked ball playing 30-something boys from Bridgewater asked me questions like "where d'ya get a fancy shirt like that?" It will be a long time before anything a Sioux Falls driver says to me through an open car window will come close to being bothersome or annoying compared to The Montrose Experience.

A Coors Light scored me some points - they were particularly interested in the technical legal nuances around ones ability to avoid DWI points while riding drunk. I spared them the details of Chads and my involvement with the legislature during the successful passage of the permissive bill while successfully retaining bicycles within the State's definition of vehicle.

One dude had seen Harald's story on the news the night before and appeared quite down with the idea of Harald.

Parts of this story may have been exaggerated - but my actual fear in the situation need not be underestimated. In the end all was fine and "you boys ain't from around here is ya" turned to casual indifference...as it should have from the beginning.

We dined. We released Chad and Leanna from their support roles. Thank you Chad and Leanna for the support. We returned to Sioux Falls with a little stiffer wind, a little bit of rain and the same stop in Crooks. We made a quick stop at 8th and Railroad for closure. We agreed we could not comprehend why KDLT had not remained present to chronicle our triumphant return.

Clint and I then ventured the additional 12 miles toward home where we were dismayed to find we were five very long miles from reaching 100 miles on the day.  Here we are as we reached 100 miles. At this point we were very miserably happy to be done circling the block just one more time. 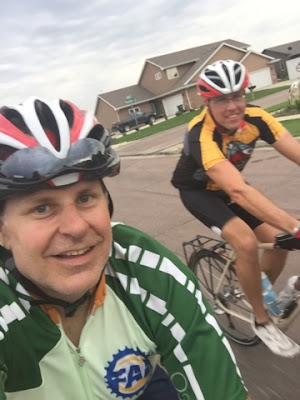 Finally, KDLT ran their story on the 10pm news and this was the featured photo on their website for this article. Chad, Harald and I. It was a good day. 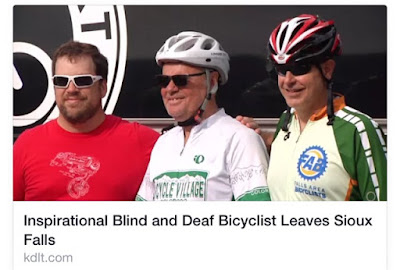