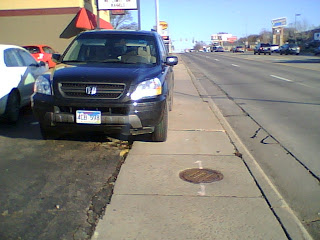 Sioux Falls' first ever cyclocross event occurred Saturday morning. 19 riders were available enough and game enough to come out and enjoy the opportunity to ride in 0.4 mile circles with others.

Cyclocross is known for its special flavors. We’re all pretty new at this so there were no men or women in skirts, no bonfires at the top of the climb, and no bacon hand-ups.

There was also no trouble with the neighbors, parks officials, or police.

Here is some of the special sauce at our event.

First, Snakebite. Who one day thought, hey, let's do cyclocross and suddenly there were people riding around in circles. He has a way of doing that.

Jason Harms showed up early and said he was there to help - and he was - and he did.
--

Adam rode his bike through town with a 10 pound sledge in one hand after the hammer we were using to place barriers malfunctioned.

One racer tied a cowbell to his handlebar because, especially at cyclocross, there is no such thing as too much cowbell.

Before the race we took a moment to observe THE MONOLITH. It’s an electrical utility.

Antknee filled the role of the guy with no hair and a beard that goes to 11.

It’s important to have an Irish Guy in a Team Ireland kit.

That’s Kathy on the left from the Sioux City contingent. Tammy One-Speed chased her around the course all day. How about a special shout out for Madeline the youngest (12) participant! YES!!!!!!!!!

No, this is not Team Ireland carrying his brand spanking new Surly 1x1 Anniversary Edition with Large Marge rims and even larger tires because he didn’t want it to get dirty. The most striking feature of cyclocross is the torturous placement of barriers on the course. That’s a barrier he’s stepping over.

Thankfully we didn’t need his professional skills (no last rites?) on the course. It’s always nice to have a minister on hand. Any chance we’ll make tomorrow’s sermon Rev?

At the end it’s good to have a lot of cold, sweaty, drained people being held up by their bikes. The Muscle was a long way out in fourth, clawed his way back to 2nd and finally landed in 3rd after succumbing to Kyle’s tactics.

At least one team photo, it’s winner of the B event Peter on the right. 2nd place in the A event Kyle is second from left.

I’m ever so pleased that heretofore unknown to us, 15-year-old Zack from Crooks, SD rode away from everybody and won the A event. The enthusiasm of his family was warmth.

The Local Daily's photo gallery of the event is here.

See The Hooterville Mayor's photo/video montage on his blog.
at 7:09 PM 4 comments:

Awright, enough about being all bike friendly an stuff.
at 7:03 AM 1 comment:

According to Bill Nespar, director of the Bicycle Friendly American Program reviewers [of our application] were particularly impressed with:

1. Efforts to educate young people in every school to give them the skills and confidence to ride.

2. One of the best urban bicycle path systems in the country and recent on-street improvements to the network.

3. The new bicycle master plan and investment to connect the overall cycling network.

3. Encouragement efforts such as consistent club rides, annual bike to work day, and events like the Tour de Kota and the downtown criteriums.

4. Dedicated advocates including those at the Falls Area Bicycle Club are a huge part of the successes in Sioux Falls.

5. The growing bike culture in Sioux Falls; it’s clear from your application and from local reviews that Sioux Falls is becoming a great place for bicycling.
at 10:55 PM 1 comment:

Snakebite has the proof. I see that "crazy MinusCar Guy" got himself into some of the photos.

It is a great day to be a bicyclist in Sioux Falls. Congratulations Sioux Falls!
at 5:22 PM 1 comment:

See The Mayor unveil the signs tomorrow at 12:15pm at Cherapa Place.

Be there to tell The Mayor, and City Council, and Division Heads just how happy you'll be to attain the silver level by 2013, when The City has to reapply for the award.
at 10:12 AM 1 comment:

The Mayor of The City will be hosting a bike related press conference Wednesday, 12:15 @ Cherapa Place. If you've ever ridden a bike before you should get on it and ride to this press conference.

Seriously, I think you should. Especially if you read The MinusCar Project and nod your head in agreement more often than you shake your head in disappointment.
at 11:31 AM 3 comments:

At the recent City bike committee meeting The Planner offered the monthy counts of bicycles on busses. Looks like it may have been a pretty good idea to finally do that...

Looks to me like freedom begins with a B for a lot of people.
at 7:36 PM 2 comments:

Friday night I pulled the snow bike off it's hook, loosened up the rusted front derailleur cable and made sure the wheels go 'round. They did so I was ready to roll in the morning for the first winter FAB Coffee/Donut ride.

Saturday morning I pulled myself off my hook, loosened up the knees and made sure the feet go 'round. They did so I looked outside at the light snow accumulation. I was mildly disappointed the find no accumulation on the pavement.

The snow bike was not necessary.

At the rendezvous I discovered a handful of amply dressed individuals on bicycles.

We rode. Destination #1 was Legacy Park via the John Thune funded MUP.

Apparently blue was the color of choice for the morning. I wore standard MinusCar black.

Destination #2 was the roundabout at North University Center which might as well be in Fargo for as far as we travelled north into the north wind.

We looked with suspicion and curiosity upon the heavily barricaded plant somewhere out there near 60th & Marion Road.

Destination #3 was biscuits and gravy at Michelle’s. Mmmmmmm…

Destination #4 was Daylight Donuts – because we’d seen coffee but hadn’t seen any donuts on the ride.

20 miles later the ride returned to the rendezvous.

The man on the phone, upone learning I wanted it all fixed asked, “you’re gonna drive it for a while yet?”

I received a very important e-mail yesterday. A few years ago I took one of the best pictues I think I've ever taken and attached it to one of the best posts I think I’ve ever written. The post was a birthday wish to a then 60 year-old woman in Sacramento.

Kristin has retired. She still doesn’t own a car. After being hit by one she used an electric cart to be mobile. Six months later she healed enough from the broken leg to start riding again.

She keeps her multi-occupant auto miles to around 5 a month by utilizing the bike, bus, and light rail to get around.

The bikes! YES! Somebody’s grandmother has two junker bikes that she selects from when she doesn’t want to leave her good bike parked outside places. Mostly the bikes are given to her by people dispossessing them. She has enough to “provide for visitors who are now resigned that coming to California to Grandma’s house means cycling everywhere.”

When I picked up the car tonight the man on the phone, who has been my auto mechanic for 20 years, and was in fact not on the phone since I was on site – how weird would it be if he was talking to me through the phone – asked me if I’m still riding and limiting my car use. You bet!

He is too. He said, “You forget how peaceful the world is until you get out of that machine.”

I just might have the coolest auto-mechanic ever.
at 9:50 PM 2 comments:

As I gathered numbers for the donut I noticed I've driven my car less this quarter than any other quarter of The MinusCar Project. The daily posting provides good motivation.

Today I filled my car up for the sixth time this year. It had been 81 days since my previous fill.

The MinusCar Project has it's own Facebook page. Get mostly short mostly daily updates there and follow MinusCar approved events & meetings - or see the same updates on this page in the right column.
at 8:31 PM 3 comments:

“This Gift To You Is Also A Gift To The Earth”

“That's what money is, stored energy. Now energy follows belief. The economy is based, I believe, not on scientific laws as much, but on peoples' beliefs…”

A few weeks ago as I wandered through the Green-ival a man stopped me and handed me a $20 gift card to the Empire Mall. He explained that a portion of the value of the card will be donated to a tree growing charity. I pushed for clarity. You’re giving me this simply because I’m wandering around the Green-ival?

Almost all carbon based energy, which releases carbon-dioxide and contributes to the changing climate. I assume this was a relevant consideration, beings I was at the Green-ival.

For every 20.0 units of energy I burn they’ll give 0.7 units to the “green” enterprise. Rocket science is no pre-requisite to observe this as a very lopsided equation.

“What is a good life? The answer to that drives an economy or other such questions or thoughts or beliefs. I believe that I'm alone and therefore I have to have something to be with me, to take care of me. I'm not safe. My whole life is about getting safe, so I spend money or don't spend money based on these kinds of beliefs…”

Energy and the economy. Economy and energy. Inextricably linked.

What if the economy wasn’t the most important thing? Would I really need to use so much energy?

This is good news! The book that guy read from is one of the bestselling books of all time!

The italicized text in this post is lifted from and episode of Krista Tippett’s Speaking of Faith public radio program titled “Repossessing Virtue.” It is Dr. Rachel Naomi Remen.

The YouTube video is pastor Francis Chan.
at 7:24 PM No comments: