That guy over there at CycleSD was nice enough to create this.

Does Bob Mercer suggest measuring the three feet between me and his 4000lbs of steel and glass with a 3'1" fish? 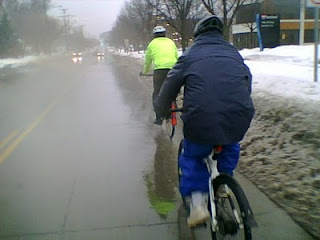 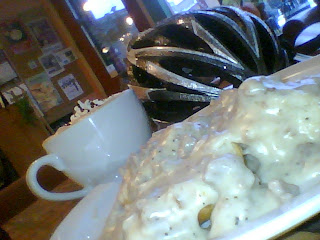 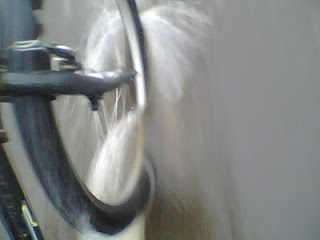 The second best part is the rain isn't a factor because it's no different from splashing.
at 9:10 AM No comments: 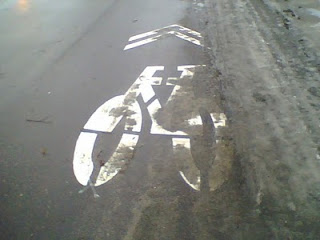 The best part of riding in weather like this is the high percentage of motorists that stay home.
at 9:05 AM No comments:

Where DOES The Time Go?

Is this thing still on?

I haven't yet made summary of my MinusCar performance for 2009 - so I've got no empirical evidence of improvement. I think my car miles decreased again but I'm not sure. I DO know that last year I purchased my first tank of gas on January 26. This year I'll likely be a day or in arrears of that pace.

Lots of snow. Lots of snow and rain. A little extra driving to enjoy the snow on skis and snowshoes is putting me a tad off pace.

In other noise - the top three MinusCar Project efforts at this very moment are...

I'm on the schedule to teach the League of American Bicyclists Traffic Skills 101 through the school districts Community Education program. This is probably the most important development for me personally.

State Senator Jerstad introduced 3ft Please legislation this week. The MinusCar Project is mostly ambivalent about asking for additional legislation. It's important for lots of cyclists though - it's a movement that's sweeping the nation, so I'll be supporting the effort by helping the South Dakota Bicycle Coalition.

Meanwhile Articles of Incorporation are being signed, bylaws are being drafted, the checkbook ended up in my hands after a meetup at Monk's this evening. Yep, evidence people still trust me with their money. We're planning the trailbuilding kickoff and the approach to the summer's trailbuilding activities. Snakebite's riding herd on this project - we're calling him President Snakebite now.

Finally, Bike To Work Day is the third Friday in May. It's a late start for planning but we're in our third year of putting on essentially the same event. I THINK things will fall into place. If not, there's still going to be free pancakes. There will also be an increased presence of the Snakebite's Bike To Work Challenge. The MinusCar Project will be offering assistance.

It's not an accident that there's four things on my top three list.
at 12:35 AM No comments:

I Have Transportation Issues

Today as I waited for SAM (formerly Sioux Falls Transit) surrounded by beautiful falling snow lit by the red taillights by passing motorists a dear woman stopped on the road behind me and inquired if I'd like a ride to school. How surprised she would have been to find this snow covered old man sitting in her passenger seat.

The snow continued for most of the day again turning me into the snowman checking in for his workout session. I assured the desk folks that I do occasionally find a way to exercise outside…which somewhat alarmingly isn’t free. It takes taxes or special permission, or both.

Later in the day I was informed repairs were complete on The MinusCar. After another decent walk through much less falling snow, I was sitting in the driver’s seat of a running car. It had been a few days since I’d last handled a steering wheel.

On the way home I stopped long enough at Best Buy for The MinusCar to break again.

So there I was. Without a car. Stranded. Just the way I like it.

I wandered west on 41st Street and found Señor Wiener. I stopped and enjoyed a chili dog and some innuendo from Sioux Falls premier weiner specialists.

I wandered west some more and decided to check for Adbusters Magazine at Barnes & Noble. Sold out. I browsed for a moment and realized the book I wanted to read was in my pocket so I filled The MinusCup with some chai and read…

…until The Family caught up to me and we went home to shovelling.