Today is the only day

Today is the only day in my lifetime that Easter and my birthday are on the same day. Happy Easter.
at 12:04 AM 2 comments:

After a post like yesterday's and a weekend like last weekend I like to take a breath and remember that mostly it's all futile. Read all about it in Ecclesiastes, or at The Little Blog in the Big Woods: Pushing On Icebergs:

My metaphor here is that huge societal problems are very much like icebergs. They are huge; massive, with tremendous momentum and inertia. Walk up to an iceberg (standing on anything you can) and push on it, as hard as you can. You will not see ANY response from the iceberg; it's just too massive for you to affect, you and all your force are infinitesimally small in comparison to the berg.

Find a good place to set your feet. Dig in. And push. Don't quit. And don't waste your time yelling at the jackasses to come help- they won't, and the yelling just encourages them. Just keep pushing. And watch and see- somebody from the crowd will come and start pushing too- right beside you.

On Rapid City, I Have A Crush

Friday noon we furnished lunch for some VIP's. While we had them with their mouths full of food we entreated them to core vehicular cycling principles. We began with South Dakota law, moved to Rapid City ordinance and finished up with lane positioning and the principle that a cyclist will control the lane until they deem it safe to share the lane.

It was a truly amazing group of people. Two highlights. First was the young scofflaw bike shop mechanic's question - "you're saying if I ride from a sidewalk through a crosswalk and I get hit by a car it might be my fault?" Yes, yes we are. Second was the Chief of Police, with three other officers and a city councilman present, giving a beautiful monologue about pedestrians and bicyclists having a role in creating a community worth living in that a livable community advocate would really appreciate.

Friday evening and Saturday we went through the full 9 hours of Traffic Skills 101. I had a great time. I am truly hopeful and excited about Rapid City's future. I'll put the 30-something's in that class up against any of the cycling hipsters I know in Minneapolis.

It's gonna be tough for anybody to beat the councilman who advertised his campaign by riding around town on an Atlantis pulling his signs with a BOB Trailer. And his wife also in the class, with her Rambouillet.

Also Friday, we did a walking tour of the landscape improvements being built on 6th(?) Street as well as South Dakota's only (I think) cycle track. It's very fun and interesting to be given a tour of facilities by a person on the design team. 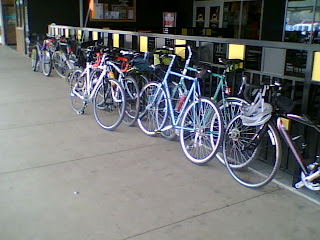 What is the purpose of the study? - "The I-29 Exit 77 Crossroad Corridor Study will be a guidebook for roadway and access improvements over the next 5 to 20 years for 41st Street, Louise Avenue, and the I-29/41st Street interchange."

"The primary transportation related considerations will be roadway capacity safety, and access. Other considerations include pedestrians, transit, and aesthetics." (I swear the presentaton "considerations" slide included bicycles.

What's good for pedestrians and cyclers is good for safety, access, transit and aesthetics.

First and importantly: tomorrow at 5pm at JFK Elementary there is an open house to gather input on re-creating 41st Street from Valley View Road to Kiwanis Ave. Decisions made in these planning stages will be with us for 40 years.

Anybody who's ever said or thought that there ought to be bike lanes on 41st Street must go to this open house. I'm looking at you former Senator Jerstad.

Perhaps someone will get really crazy at the open house and point out that this section of 41st Street is one of those places that James Howard Kunstler calls "not worth caring about." The reason Krispy Creme, or Timberlodge or Senior Weiner can't survive here - where 40,000 vehicles pass each day - is because it's a place where nobody wants to be.

I'm gonna ask that a Complete Street be built.

Yep, I drove today. Got the call, my Flux Capacitor had arrived and was installed. The MinusCar II was ready to roll. Again.

So I used it to get more errand running done. I also attended The City's Bike Committee Meeting and retrieved The Boy 9 from the steely grip of the Piano Teacher.
at 9:45 PM 1 comment:

Not much biking going on here today. It was a ret and wainy Saturday.

The graph shows a bunch of time spent in a car with other people. I think we did pretty good though. We got haircuts and breakfast and bread and groceries and bike tubes and groceries and gas and retrieved something from The MinusCar II at the service garage and groceries and SDBC mail and FAST mail. All in one trip.

I did manage a little bike ride. The Wife wanted a Coke. I'm nothing if I'm not receptive to The Wife's need for a Coke. So I grabbed The Boy 13 for a trip down the road. We noodled around a bit on the way.

I spent a significant about of time today on the phone preparing for my Traffic Skills 101 class in Rapid City. Should be a good time. I enjoy working with the other League Cycling Instructor in the state.

Part of that trip will include some time with a few Rapid City officials. We'll brief them about what we're teaching citizens about riding bicycles in their city. Should be a good time - especially since I'm fresh off my local meetings a couple weeks ago - and especially since they're in the public feedback stage of their first bike plan. A plan that may rely a bit heavily on relatively dangerous sidepath facilities and not enough on less dangerous roadway improvement.

I also spent some significant time sourcing proofs that cycling on sidewalks is more dangerous than riding as a vehicle in the roadway.

Bob Mionske's Bicycling and the Law has been coming up a lot in my policy related conversations. I haven't read it cover to cover but reference-wise it's been indispensable. The MinusCar Project seal of approval on this one.

I met a guy for lunch downtown today. Good times. Once I found this bike parked I knew I was in the right place. Isn't it purty?

I utilized the bus for the round trip to downtown. Good passenger counts! I waited with about 10 other riders to board. Somewhere along the route we got in trouble from the driver. He thought the guy next to me was playing some awful loud music.

The ol' ears are what they used to be. I redirected the driver to the back of the bus where the music was actually coming from.

One way to not drive so much is to have a car that's in the shop a lot. It especially helps if parts are unavailable (or very far away) for said car.

I almost needed a car today because it's my turn to fill the water jugs at work. Instead I took a vote and we decided to discontinue buying water at work. Lucky for me none of them read this.

Hey, LAB Traffic Skills 101 is going down in Rapid City the April 15 weekend.

I know, everybody already knows how to ride a bike.

Recently some strange men were at my home taking moving pictures. Good times. Especially fun to see Snakebite playing the role of Boom Operator. I think he's got a bright future.

Awright, enough of this, I gotta go eat some more Goldfish.
at 6:57 PM 1 comment:

I drove some again today. Oh yes, this is indeed my new non-permanent reality. Since the weekend The MinusCar II computer has been spitting out messages: service ABS, service Steering, service Traction Control, service Stability Control.

Methinks the computer doth protest too much. Perhaps the computer in the mirror could help it identify the problem. Or maybe my mechanic will service all those things for me...I guess I didn't tell him not too.

But I also rode some. Except when I headed downtown in the evening for a meeting with the men of Falls Area Singletrack. Yup, spring is upon us - we must gather members and calendars and dig dig dig.

Oh yeah, I rode some...and I realized I gotta be careful riding through my neighborhood. When I got home there were Goldfish in my bag.

I didn't realize I'd been moving that slow.

I'm entering a bike in an April 16 triathlon. So I drove today with two bikes on the back of the car with the intent of one begin picked up by the triathlete and riding the other one home at the end of the day.

As I left work I found the Pugsley - not the one participating on the triathlon - had fallen over. Why? Because sometime during the day the tube had burst. Boom! I feel sorry for standers-by when that blew.

So I drove home.

It's clear that winter is in the rear view mirror.

It's important to keep reminding myself there are two months of cold and rain ahead.

I rode my bike a little bit today. Drove some and walked some too.

A few weeks ago I spent 2 hours sitting at a table in the bowels of City Hall with a police attorney, a police officer, a traffic engineer and a planner. Good times. I only disappointed myself once - and I was never officially arrested.

Is that 18 miles of shared & signed roadways? If a tree falls on a bike plan in the middle of the Black Hills National Forest and the cyclists in the community give a collective "meh", does it matter that the plan ever existed?

Wouldn't it be cool if Rapid City - already with all the singletrack in the world - created national level urban cycling infrastructure?
at 9:31 PM No comments: