My friends at Spoke-n-Sport have put together a small series of Cyclocross races this fall in city parks.

I remember quite clearly, many years ago, being told that bike racing in city parks will never happen, they're too concerned about their grass. Then last year Snakebite hosted his 50/50 Cross event.

This year there are three events. When I can I'll be strapping the portable grill to the Xtra-cycle and making bacon and drinking dark roast at the top of a climb.

Tonight the Sioux Falls Bike Committee met at the downtown library. This committee serves to provide cycling community input to The City as they execute the priority pieces of The Bicycle Plan. It's a public meeting.

This is the bike rack...and sign posts around the front entrance of the library. Let's turn a couple of those car parking spots into bike parking, eh? (Bike counts do not reflect meeting attendance.)

Much goodness was covered in the meeting. In fact it was quite possibly the most meaningful and productive meeting of this group. Ever.

Stolen Bike: The Salsa Fargo has been found. No doubt the thief didn't like it's size. Or fenders.

My buddy Atom lost his bike in the wee hours of the morning today.

He rides a Salsa Fargo. Atom is an XXL guy. So is his bike.

"I returned home only to drop my baggage and other randoms...i walked outside (into my backyard) to see my fargo GONE...!"

This is a VERY large bike. XXL frame. 29 inch wheels. Please be on the lookout.

This bike has fenders on its 29 inch wheels.

For as much much driving as I did today it was a pretty good MinusCar day.

The Ride To Remember: despite early rain, wet roads and cool temperatures 25-30 rollers departed Colorado Technical University at 8-ish this morning. The police department was kind enough to give us a two motorcycle escort. They blocked traffic at intersections for mostly worry free passage through the high volume suburban sprawl roadway.

After returning to the campus CTU provided bagels and The Owner and I split speaking time. I covered five roadway cycling tips and one driving tip, he covered the ABC Quick Check and other maintenance items.

KELO(land) and KDLT gave the event nice coverage this week. KELO(land) attended most of the event today. Their video is embeded below. Mr Bite, the CTU President and ummm...that MinusCar fellow are featured.

For the afternoon The Wife had a few hours of work to perform downtown. I had a few stops to make. We departed with The Boy 9 and headed to the "A Growing Place Garden: Harvest Festival" at Lowell Elementary.

I'm a huge fan of this project. Of course some of my favorite people are involved. This is the current best hope for teaching urban agriculture to students and building a culture of locally grown food.

This is the newly completed green house built on school grounds. The dirt boxes are built right on the asphalt and we identified tomatos, eggplant and kohlrabi. Interestingly this week Steven Colbert lamented to the US Congress that dirt is at ground level. Here it is not.

With some time to kill we headed to Falls Park to view the swollen falls. The Boy 8 spotted the trolley on which we rode a lap and dropped The Wife off at her employer. The Boy 8 and I were left to entertain ourselved.

Which we did by spending 3 hours at The Falls. We climbed stuff...

We enjoyed a cool beverage and I introduced him to the idea of The Red Hat Society...

We observed The Falls of the Big Sioux River...

And we noted this strange palette load...

Finally it came time to retrieve The Wife, but first we stopped off at City Hall to ride the Bike SmART rack...

And we observed this strange palette load...

So I went to The City's website to find out "Why this is here?"

To be clear, part of living the MinusCar dream is having time/being forced to linger. The Boy 8's curiosity led the way on our 3 hour tour of the park. I wouldn't trade that for the ability to run to B & G Milkyway in it's final weekend - as important as that is.

Finally the evening's activity placed me at Monk's House of Ale Repute for a bit of a celebration. Our Falls Area Singletrack project passed a significant milestone in the last month and it was time for some celebrating.

Community occurred...and it was good.

And this guy. Was there. 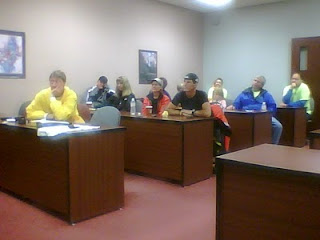 Rapt audience at Ride To Remember
at 9:57 AM No comments: 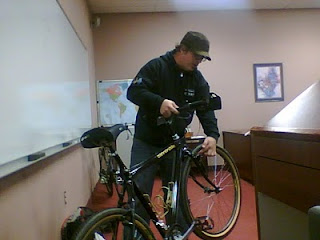 The Owner. Telling it at the Ride To Remember.
at 9:51 AM No comments:

My friend DW snapped this photo and placed it out in the Universe of Twits.

Did I say that right?

The Ride To Remember

Hi mom! I fell in with some new friends. I think it's ok because some of my old friends fell in with them too...

The Ride to Remember

On Saturday, September 25, at 8:00 a.m., a bicycle ride will be held to honor Dr. Kevin Rogers. The ride will be escorted by the Sioux Falls police and will leave Colorado Technical University's campus at 3901 West 59th Street.

The bicyclists will ride from the CTU campus to the location where Dr. Rogers was killed in a bicycling accident. The round trip distance for the ride is exactly five miles.

A moment of silence will be held prior to the ride at 7:45 a.m. to honor Dr. Rogers and others who have recently died as a result of bicycling accidents. Dr. Rogers was a valued faculty member at CTU for a number of years.

After the ride, at 9:00 a.m., CTU will host food and bicycling fun in the campus parking lot.

Bicycling Safety 101 - Mike Christensen, a certified bicycling safety instructor, will discuss topics such as increasing the safety of roadway users, the importance of helmets, strategies for in-city riding, and the dangers of impaired or distracted driving.

Bicycle Repair 101 - Spoke-n-Sport is sponsoring a fun event that will focus on the importance of safe bicycles and quick checks to make sure your bicycle is ready for the road.

Sam Trebilcock will also have mini-bike rodeo activities available for children at the post-ride event. 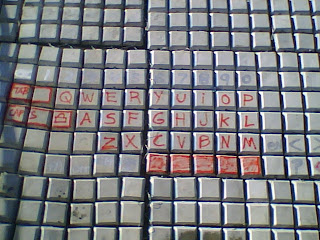 ...under 41st St bridge. For a moment I thought this was funny. Now I just wish SF had better graffiti artists.
at 9:09 AM 3 comments: 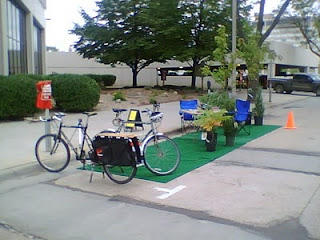 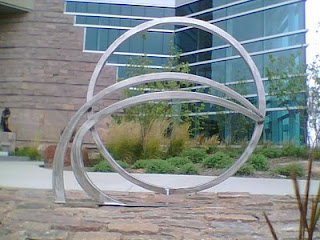 ...but when you shouted "hi" from the hole in your cage just a block and a half from that sensor actuated red light I thought it meant you were open to talking. So I hurried to catch up.

Imagine my surprise when I rolled up beside your open window and returned the greeting, you had to peel yourself off the ceiling.

I suppose it was dark and you coudn't see me coming. I was without lights, a terrible mistake to be sure, but sometimes it happens.

Anyway, I apprecitate you and your boyfriend's good humor throughout the encounter. It's nice when we can all smile and laugh together. 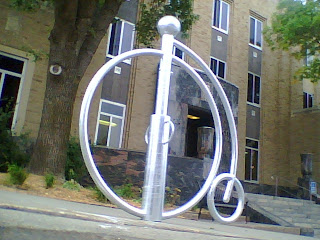 Holy cats this week there are so many bike events in the area you can’t toss a 40lb Huffy without hitting someone at a bike event!

The Metropolitan Planning Organization Bicycle Plan is getting some huge attention right now as planners and consultants are visiting and looking and plotting and figuring out how in the world to connect our city with three neighboring towns via multi-use trails.

All day today they met in Brandon. Tomorrow is Harrisburg. Wednesday is Tea. I think they might even be going so far as to get their shoes dirty to find ways to go places. In each of these towns there is also a public input event from 5:30pm to 7:00pm on their respective days.

I helped with the bicycle plan. I haven’t been able to get involved in the current efforts. I wish I could. One of the consultants plays at the national level. The company name appears in print often – now that I know to pay attention for it.

Imagine 30 years from now, when these cities have grown together the value of having a place to recreate where a person can go for miles and miles without crossing a road. It won’t matter so much then that Sioux Falls the town are connected by the trail. It will matter that that type of recreation is possible and it will be a big deal for those neighborhoods.

Here’s a bit of news about that effort - http://tinyurl.com/33ucmfp

Tuesday morning The City makes a public splash of their Bike SmART program. This program finds support in the city’s bike plan. It seems like two years ago or more when the first call went out for artists to submit artsy designs for bike racks – and nobody responded, not even David Byrne (although I do know that some effort was put in to him submitting). A second similar request went out half a year later which resulted in some fruit. Now another year later and TWO racks are being placed (or maybe they’re in place) and The City marks the occurrence with a presentation at City Hall. Tomorrow. Ride your bike so you don’t have to park, pay and walk.

Friday is international Park(ing) Day. Sioux Falls Pedicab with the help of Landscape Garden Center will claim a metered parking spot near 9th and Phillips for the day with “grass”, a tree, and other fun items. From there free pedicab rides will be given to anyone who agrees to pull their bike out of the garage, dust it off, and go for a ride this week.

Another spot apparently will be claimed by a group from Architecture for Humanity. I’m not sure where but I’ll be looking for them.

Here’s some newsy bits about the pedicab rides - http://tinyurl.com/36eagja

Does that seem like enough? How about today’s MinusCar statistics?

I walked a 1/3 mile with The Boy 8 today to a bus stop. People really hate the inconvenience of not having a car. I really like spending time with my son with nothing to do but BE. While we waited for the bus The Dad came on his bike to tell us a few stories. That’s three generations at one bus stop – if you’re scoring at home.
at 8:48 PM No comments:

This past weekend I guided a group of bike riding people through the League of American Bicyclists Traffic Skills 101 materials. Thursday and Friday evening and Saturday morning was all about talking and doing bikes.

It's a beautiful thing to see the shifts in thinking as we work through the course. The course includes an hour on city roads to demonstrate the concepts put forth in the materials. During that ride someone commented that experiencing road riding isn't nearly as intimidating as it seemed. Beautiful.

Here's our route. We don't mess around too much.

The course evaluations reveal that 75% of the students indicate "yes" when asked "do you plan to bicycle more in the future than you did before taking this course?"