Surprise! This Part's Closed Too!

For many months it's been known that this summer will be a bad one for bike trail closures. 9 of the 20 miles of trail will have planned closures.

* Yay! - the replacement of the Central Main Sewer line, originally a 3 year project, has been condensed to one season. After this is complete we should be able to discontinue the dumping of poop into the river - like we did so much last spring. Sadly the work won't be completed for this spring's thaw.

* Meh - the raising of the dike to save money on flood insurance. The new flood maps came out and many more landowners found themselves in flood plains. Raising the dikes will save rich people a gazillion dollars in flood insurance premiums.

Part of this project includes the building of a wall between the country club golf course and the bike trail. The wall building is underway. Hopefully our local graffitti artists will take this opportunity to improve their woefully lacking skills.

Remember kids it takes more than a can of spray paint an a 5th grade vocabulary to make art.

Last week our Mayor used some of his keen business acumen to call a press conference to explain to us good people of Sioux Falls that winter's record snowfall north of here could cause record flooding south of there, or here.

Today they announced another large closing of the bike trail to do some urgent reinforcing of the dike nort of Skunk Creek.

The Earth warms up, the air holds more moisture, the moisture falls to Earth and gets stuff wet.
at 8:08 PM 2 comments: 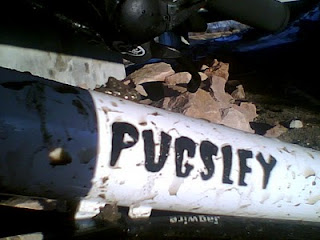 Things got a little messy on the way home today. Let me suggest a Pugsley downside: the 4" tires can hold 2x mud. Sure is fun playing in the mud after two weeks of very intense work. Tomorrow's high 46. Masybe I'll pack some shorts for the trip home.
at 10:45 PM 1 comment: 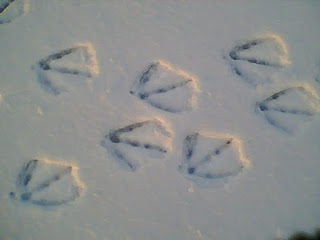 Ash Wednesday. It was today. I saw one. As I'm wont to do during this season my mind wanders to days long passed. And today - because I'm thinking about Lent lots - I remembered this article. Biking as a Lenten practice - By Melissa Bixler

Meet: David and Cindy "have been married for 20+ years. Neither of them drive; she is blind. They live in those apartments and travel just about everywhere on that tandem."

Tragedy: "... were hit from behind last night. Cindy is gone. David is in critical condition and they’re not telling him."

Distracted Driving: "Police believe a driver who hit a couple Monday on a tandem bicycle, killing one, may have been distracted by reading a map."
at 10:08 PM No comments:

So much going on I'm having a tough time keeping track.

1. We put the key in and turned it. The 2011 Sioux Falls Bike to Work Day event started up. It's always the 3rd Friday of May. Come on out. Grab some celebratory food stuffs. Leave your car at home.

In an effort to get broader input for planning the day take a moment and PLEASE visit this Survey Monkey link. Answer our two question survey.

2. South Dakota Bicycle Coalition has put out it's first newsletter. It's true we're looking to actually pay someone to complete some administrative tasks. Really! Here's a link to a description of the help we're looking for.

We met a week ago in Mitchell to process the Bike Summit experience. One of the results of this meeting was the formation of some committees. I'm the board person pushing on the Bicycle & Pedestrian Education & Safety Initiatives.

Our friend Jim Books operator of Dakota Bike Tours will be a National Bike Summit panelist for "Creating a New Power Base – Organizing and Supporting the Bike Travel and Tourism Sector to Support Bike Advocacy." It is exciting to me to have a South Dakota cyclist representing at the summit.

3. Smart Cycling - I'll be teaching another section of Traffic Skills 101 April 28, 29 and 30 through School District's Community Education program. Here is a link to their information.