For the original Coffeeneuring idea visit the Chasing Mailboxes blog.

For my original Sioux Falls Coffeeneuring invite visit this post.

The next Sioux Falls Coffeeneuring ride is tomorrow (10/13) at 9am from Coffea Downtown.

The second next Sioux Falls Coffeeneuring ride is November 1 at 9am from Josiah's. I wonder if it will be winter by then.

This morning I pushed myself out of bed at 8am knowing that in 10 minutes rider Chris Parsley would be in my driveway for our 8:24 meet-up. Yes, that's right, Chris is as prompt a fellow as I am not. Sure enough at 8:26 I raised the garage door to find Chris on his 16th minute of waiting for me. I'm lucky he'll still ride with me.

He and I do a lot of teaching that lane control is an important part of safe urban riding. In the spirit of practicing what we preach we'd already agreed that our Sunday morning route to the Black Sheep meet-spot would be on 12th Street from Sertoma to Grange. Good times.

While enroute we did receive a honk, and the driver raised his coffee cup to us. A follow-up text revealed Pastor Dave, on his way to preaching in Emery, stopped off at Black Sheep in the spirit of Coffeeneuring. 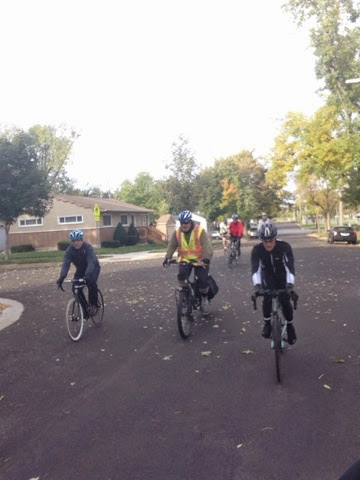 By the time our 9:01 departure arrived we'd gathered a Michael, Chris, Chad, Brian, Tim, Jake, Troy, David, Darren, a Big Dummy, and an Oxford Comma. While waiting we observed a riding dude play chicken with a driver on 12th Street, and a young woman riding side saddle over the rear wheel of a young man's bike. I wish I had a photo of the latter. They were on the sidewalk, facing traffic, oblivious to the danger and she was having lots of fun.

The two highest lights of our loop included the on-street bicycling facilities around the shiny new events center and the length of the Main Avenue Road Diet. 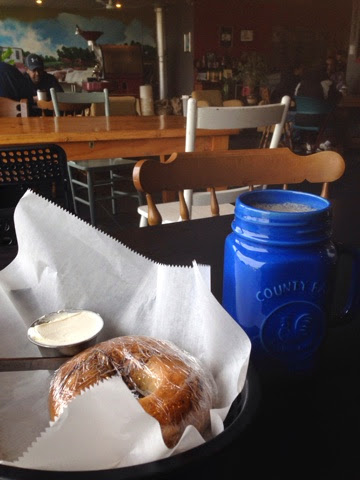 Upon returning to Black Sheep we gathered our brewed hot beverages, our muffins and bagels and sat and chatted for a while. Somewhere in there riders Jake (two Jakes!) and Steve arrived on their own Coffeeneuring Adventure to join us. 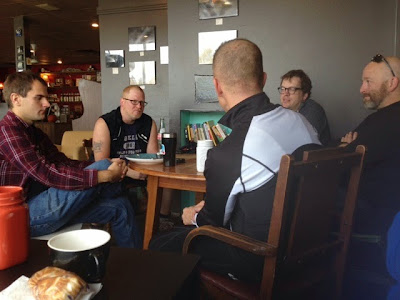 See you tomorrow at Coffea - Downtown.